Built by C.A. Spath, cashier of the Farmers and Merchants Bank; Dr. C.M. Cline, physician and S.K. Mittry, contractor: the Colonial Theater opened on November 10, 1919, at a cost of just over $175,000. It boasted one of the largest stages in the Intermountain West, a modern ramp (in lieu of stairs) to the balcony, a ventilation system, which circulated fresh air every five minutes and superb acoustics. Traveling vaudeville acts and minstrels entertained, as well as musical acts like John Phillips Sousa.

In 1929, it was renamed the Paramount Theater and began showing moving pictures. Sadly, it fell into disrepair in the late 1980’s and was closed. 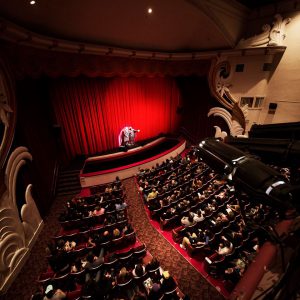 In 1994, Dick Clayton, Sr. and his son Steve donated the theater to the Idaho Falls Arts Council, a private nonprofit organization.

The Idaho Falls Arts Council launched a capital campaign, known as the Phantom project. An anonymous donor challenged the community to raise half of the total cost and the Phantom would donate the remaining. The successful $4.2 million dollar campaign renovated the Colonial Theater and the adjacent buildings into a beautiful visual and performing arts center for the region.

Renamed for the Phantom donors, Miles and Virginia Willard, who also chaired the campaign, the Willard Arts Center now contains a visual arts building with galleries, classrooms, artist studios, meeting spaces for events, and much more.

Today the 988 seat Colonial Theater is one of three large theaters of historical significance which still remain in Idaho. In 2014 alone, the Colonial Theater played host to over 25,000 patrons.